I've been thinking lately about how reactive I am to those in my church who have differing beliefs from mine.  I really need to change this.  I need to learn to listen instead of reacting.  I had an online disagreement with a blogger a few years ago.  She is a member of my religion, but has very differing views from mine.  At the time, she said some things that really upset me, and I reacted strongly.  I decided to go to her blog today for the first time in years, and I read that she has quit attending our church.  She said that she felt it was better for all involved because she reacts strongly to comments made by some people at church whose beliefs differ from her's.  I get that.  I do that.  I am just like her, although we are on different ends of the spectrum.

I reacted strongly to her declarations on her blog.  I think my biggest problem was that I worried that some people who aren't educated about our religion would think that her views represented church doctrine.  I was worried that some people might be led away from the doctrine.  So I reacted strongly, but she has admitted that she also reacts to those whose beliefs differ from hers.  She had difficulty hearing certain comments at church that went against her deeply held personal beliefs.  I think we two are alike in that way.

I wish I could learn to just listen and discuss intelligently without reacting.  I actually have that ability in other situations.  I've many times gone to visit families from church and have been exposed to things in their life that weren't in line with church beliefs.  I didn't over react in that situation.  I tried to be tactful and understanding.  I tried to accept them at the level where they are in their understanding.  So why can't I do that all the time?  Maybe I expect more from people who I feel are better educated about church beliefs?  I don't know...I'm still thinking about this.

One area that I have always struggled with is feminism in the church.  While I believe that women should be equally respected, I have always felt that the feminist movement sought to tear down the role of men.  I have never liked the man-bashing that I have witnessed.  But recently I have been thinking about how the feminists actually have helped us to have conversations that we wouldn't have had without them.  Because of their pushing, the church has taken extra effort to have a conversation about the role of women in the church.  While I am not one of those advocating for women to be given the Priesthood, I do appreciate that we are taking more time to discuss the role of women.  That would not have happened without the feminist efforts.

The same situation has come about because of the LGBT community.  Although I don't agree with some of their demands in the church, I think they have raised some important questions, and they have opened conversations.  They have also helped us to look at our relations with members who are LGBT. While I may not always like the format used to bring about those conversations, I think the questions they have asked, and the conversations we are having because of them are actually very helpful.

So why is it so hard for me to just listen to their concerns without over reacting?  This is what I want to learn.  I want to learn how to really listen to what is in their heart, regardless of whether or not I agree.  I guess what I'm really wanting to do is become more open minded.  I need to learn to really understand differing points of view within my religion without becoming reactive.  I actually think I'm better at this with politics than religion.  But I should be better at this with my religion because there is room for everyone at church. 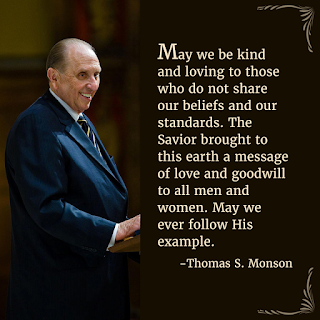 Posted by Delirious at 5:10 AM