The other day I saw a restaurant that specialized in chicken feet.  I noticed that the character for the chicken's foot actually looked like a claw.  Evidently that didn't sink very far in to my brain though.  Here is a picture that I took of that restaurant. 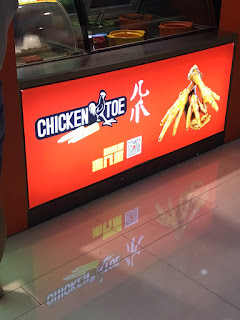 Today I went to another restaurant and decided to get some beef noodle soup.  They don't put many vegetables in it, so I looked on the menu and saw a section titled "small vegetables".  One of the characters on the sign looked like "gua" which could refer to some kind of squash.  I took some chinese classes in college, but my reading ability isn't very good, and here in China they use simplified characters instead of complex ones.  I learned the complex ones.  Well, sort of learned them.  I read about the same level as a first grader.  When I asked the waitress about the "gua", she replied using a different tone.  I should have had a clue then, but I thought maybe I just remembered the tone wrong, or maybe because of her dialect she said it differently.  So I ordered the "Dong gua".
Here is what they brought me: 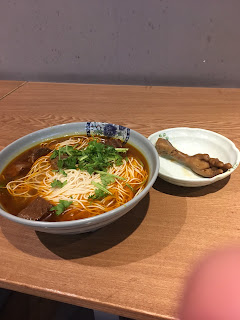 I should have remembered the character from the chicken toes restaurant!  I thought to myself that maybe I could learn to eat it.  I honestly tried, but couldn't eat it.  I even tried to just gnaw it a little so that it would look eaten when the waitress came to clean up my dishes, but I didn't really get very far with that.  It was just repulsive to me.  I remember as a missionary being served chicken's feet once, and failed at eating it then too.  I just can't get past the texture.  It's not just skin, it's soft, almost gelatinous skin.  And honestly, then I tried nibbling on the claws, but immediately pictured in my mind the chicken scratching around in chicken poop.  I couldn't eat it.

The beef noodle soup was delicious, but a little spicy.  So after lunch I went to the convenience store to buy a container of milk.  But once again, my characters were so bad that I couldn't tell what was what.  I finally asked the store attendant if the milk I was looking at was yogurt milk or fresh milk.  It was yogurt milk.  I like yogurt milk, but that wasn't what I wanted.  Finally I saw a small bottle of milk that had "milk beverage" written in English on it.  I bought that.  It turned out to be sweet, coconut flavored milk.  It tasted good, but alas was not what I had wanted to buy.  So I'm learning.  Very slowly......

And speaking of food, my husband and I went out to eat hot pot.  It actually was very good.  But we had a stomach ache all the next day.  We won't be going back. 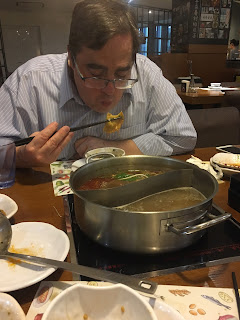 Tonight we ate Papa John's pizza.  It was okay, but after eating Chinese food every meal for the past week, it was kind of heavy.  The last thing I want to try is a shrimp/rice patty burger with mango at Burger King.  I am curious to see how it tastes.  I'll let you know.
Posted by Delirious at 5:52 AM

I always ate the local cuisine during my travelling days and occasionally did have upset stomachs. Part of the travelling man's regular problems.