I got word this morning that my father passed away Monday morning.  He was about 6 weeks short of his 87th birthday, and a week short of his 69th wedding anniversary.  I'm not sure why, but our family has kind of been expecting this, so it didn't come as a huge shock.  My mother seems to be handling it quite well at present.  I think the shock hasn't quite set in yet.  But I feel that he was very blessed in that up until now he hasn't had any serious illness that incapacitated him, or forced him to have to live in a care center.  He was able to live at home up until the end.  He also had a relatively peaceful passing.  He and my mother were on their way to visit my sister when he had a pain in his chest.  My mother was driving, so hit the gas and drove about 90 mph to the nearest hospital that was about 15 miles from home.  He had one more pain.  When they got to the hospital they worked with him doing CPR, but his heart wasn't strong enough to recover.  I think my mother can feel grateful that she knows she did all she could.  If she had called an ambulance, it would have taken even longer for him to get care.  So I feel really at peace that it was his time to go, and that it was an easy passing.  Here is a picture I composed of him when he was young, and another that was taken a few years ago. 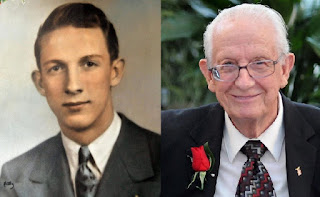 Posted by Delirious at 8:30 PM

My thoughts and prayers go with you and your family. He looks like a nice man - something sorely lacking in today's world.

My heart goes out to you Delirious in your loss, your father looks like a fine man.

I will keep you and your family in my thoughts and prayers.

My heart felt condolences to you and other members of your family Delirious. May his soul rest in peace.

Condolences to you and your family.

I'm going to miss him dearly. He was such a great man. I'm just glad my kids got to see him a few times!

I'm sorry for you loss! It is always hard, even when you expect it. My Grandpa just passed away on Saturday and while we did expect it, it was still hard. You'll be in my thoughts and prayers.

May the Lord comfort you and your extended family.

Thanks everyone for your kind wishes!

My prayers of peace for you and your mother, Delirious. And I am glad for your abiding faith, for it is a treasure of substance in this time.

Delores, my deepest condolences. Keeping you and family in my prayers.

I'm sorry for your loss. You and your family will be in our prayers.

I'm sorry for your loss. You and your family will be in our prayers.