Yesterday I went on a hike at Mo Shan here in Wuhan.  It is a "mountain" by chinese standards, but when I did a google search, the name was translated as Mo Hill.  I'm not really very physically fit.  I don't exercise much except for an occasional bike ride, or a walk to the store.  So this was a little challenging for me.

There were several things we wanted to see, but had to hike to get there.  One of the signs pointed the direction to a "petroglyph".  My nephew often gets great photos of petroglyphs in the mountains in Utah.  Here is a photo that he took of one in Utah.  I hope Ryan doesn't mind my sharing. 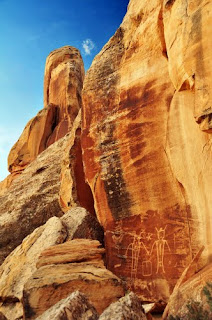 So I thought it would be cool to get one of a petroglyph in China.  We hiked for about 1500 meters up and down the mountain, only to find we had gone the wrong way.  But we studied the map and could see that if we only went a little farther, we would get there.  Imagine my disappointment when I hiked all over the mountain just to find this: 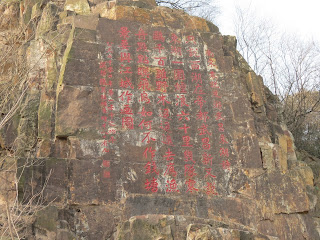 I don't even believe that this is a real ancient petroglyph.  Like most things in China, it was probably man made in recent times.  The old petroglyph, if it ever did exist, was probaly torn down.  My chinese friend told me that this used to be just characters carved in to stone, but that recently they added the red paint so people could read it better.  If it were a real ancient petroglyph, I doubt they would have painted over it.

Still, I was quite proud of myself that I was able to finish the hike.  I may not be in great shape, but obviously I was in good enough shape to see everything I wanted to see.  Maybe this will give me some incentive to get in better shape.  I don't want to get to the point where I can't make those kinds of hikes.  Self-improvement sometimes is a necessity for survival!

Check out what the other consortium members have been doing lately to improve themselves:   Rummuser, Anu, Ashkok, Gaelikka, Grannymar, , Padmum, Magpie11, andAkanksha,Will Knot, Maria the Silver Fox, Anki, Nema Noor Paul Plain Joe, and Rohit, Black watertown, The Old Fossil, our newest member MAXI! and last, but not least SHACKMAN! :)
Posted by Delirious at 3:35 PM

Particularly when it comes to improving one's fitness.

I learned a new word 'Petroglyph' today, thank you.

D - whether intended or not your opening paragraph had me in stitches. The Mo hill - LOL - not a leap to call it a mole hill - which is true when you compare it to what there are in Utah, Cali and the like.

And by will a few ofthiose hikes improve your conditioning.

Well there ya go, D. You finished the hike aaand captured images of Petroglyphs.

Downton Abbey is all the rage everywhere. Still, I think there are great actors on both sides of the pond.

The first hike is always the hardest, so well done you for completing it. I use the camera as a goal to take me round the next corner. The word 'Petroglyph' is new to me, although we have several sites in Ireland (often found underground) that I visited many times in my childhood.